As a mobile game developer, understanding demographics is equally as important as understanding gamer psychology. Due to the emergence of the Freemium model, profits depend less on acquiring downloads, but on retaining your user base. The key to retention is to understand not only who your game appeals to, but what they are looking for in their gaming experience and how to creatively capitalize on their desires with an effective monetization strategy.

Richard Bartle is a video game writer, professor, and researcher best known for creating MUD1, Multi-User Dungeon, the first and oldest virtual world in existence. One of the major pioneers of the MMOG (Massively Multiplayer Online Game) industry, Bartle penned a paper called “Hearts, Clubs, Diamonds, Spades: Players Who Suit MUDs” which has become one of the fundamental reference texts for analyzing player psychology.

Bartle classified behavior into an axis which evaluated their tendency to act vs. interact, with players vs. the world. 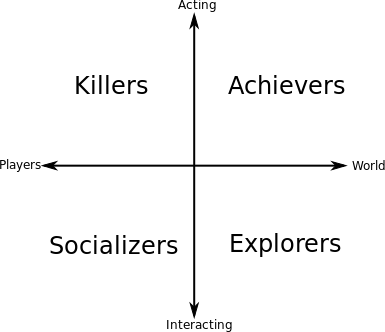 The Bartle Types break down into four categories:

Achievers seek to achieve a high status within the game. They favor acting upon the world. They put the most value in points-gathering and make it their mission to rise in levels. They will work diligently to overcome obstacles presented by the game and generally take on the challenges laid before them. Achievers can also seek social fulfillment, deriving pleasure from public knowledge of their achievements (online leaderboards, statistics, unlockables etc.). They are drawn to RPGs, arcade games, anything where they can attain a high score or achieve goals.

Socializers make the most of the game’s communicative facilities. They favor interacting with other players. They seek a social experience. Socializers are drawn to multi-player and online gaming. Their social tendencies may also cause them to engage with the games’ storylines, especially in open world games such as the Legend of Zelda and Grand Theft Auto.

Killers seek to utilize the tools offered by the game to cause distress and assert their dominance over other players and elements of the game. They favor acting on players and thrive on imposing themselves on others. They may seek to gather points and rise in levels, but only to better assert their dominance over others. Killers care less about storylines than they do about action and are drawn to shooters, sports games, and online RPGs with combat.

Explorers seek to learn as much as they can about the world before them. They favor interacting with the world. They enjoy exploring both worlds and the mechanisms of the game. They are interested in testing all of the characters, wearing different gear, playing different game modes and levels, etc. The more complex, the more a game will appeal to explorers.

In his book Designing New Worlds, Bartle has gone on to add a third axis of implicit/explicit, leading to a total of 8 player types. While players generally skew toward one player type, any given user has a variety of desires and appealing to each Bartle archetype will ensure the game will provide an emotionally fulfilling experience to a wide audience.

While Bartle Types are vital in effective game development, the template can be used or abused if not taken with a dose of creativity and common sense. Learn from the master in this lecture on how to properly and improperly utilize the Bartle Type Theory:

You can learn what type of player you are and take your own Bartle Test here.