In continuation of our exploration of the top 5 app development trends for 2016, this week we will be exploring cloud integration. Check out our master list in our blog App to the Future and be on the lookout for next week’s blog when we explore Security.

While the ethereal nature of the cloud makes it a mystery to many consumers, the cloud has engrained itself in businesses across the globe. Studies show the global market for cloud equipment will reach $79.1 billion by the year 2018.

A lot has changed since we last tackled the cloud in our 2013 blog What Can Cloud-Based Mobile App Development Do For Your Company? The aspects which haven’t changed are the basics: the cloud reduces operating costs by taking the computing load off of local and dedicated servers, it improves collaboration, and it fosters a streamlined collaborative environment.

CLOUD FOR CONSUMER USE

In the past 5 years, Amazon, Google and Apple have all monetized clouds for consumer use. These cloud offerings break up into two categories:

PUBLIC CLOUD: iCloud, Google Drive and Amazon Web Services, in addition to Dropbox and Box, all offer public cloud storage offerings. These clouds are accessible to the public through the Internet.

PRIVATE CLOUD: While the public cloud is available on the public web, the private cloud is designed for a single organization. These offerings are often crafted by cloud providers such as Rackspace, VMware, Microsoft and OpenStack.

One of  the most interesting trends in the cloud for mobile developers is cloud integration. Device integration entails that multiple applications share data in the cloud and communicate either directly or through third-party software.

A great test case is Apple’s use of the iCloud to promote device continuity. Apple uses the iCloud to make sure files and apps which are synced to the user’s MacBook are also synced to iPhone, iPads, and Apple Watch. This allows the user to alternate between devices seamlessly and encourages them to buy Apple products.

For app developers, cloud integration is a major trend within the industry. With Apple leading the charge, many app developers and their clients want their iOS apps to integrate with iCloud with the intention of luring users to download apps on multiple devices and use them seamlessly. Cloud-integrated apps represent an investment in both time and money for developers.  In order to justify the effort, the app should appeal to tablet, smartphone, and perhaps also desktop users. Cloud integration represents a major opportunity for developers to increase brand continuity by creating a user experience which is consolidated across devices and informed by data across the enterprise.

Learn more about device integration with the iCloud via Apple’s Developer website.

For those with their sights set on cloud integration, here are some of the best third-party cloud data integration software options on the market:

In the past year, material design has been rising in prominence as both an app and a web design aesthetic. As we’ve detailed in our past article How Material Design Redefined Android App Aesthetics, Material Design has the potential to catch on in a major way.  In this post, we take a look at the bright future ahead for the platform.

Facebook recently began testing a Material Design overhaul of their Android app. Additions include a floating action button commonly found on Lollipop apps. The design on the whole has a more cohesive digital world adhering to Material Design principals.

“Not only does the app look better, but it’s also going to make the app easier to use for Lollipop users who are now becoming accustomed to that floating action button.” Writes Killian Bell of Techno Buffalo.

Check out this picture of the Beta app (via Techno Buffalo) 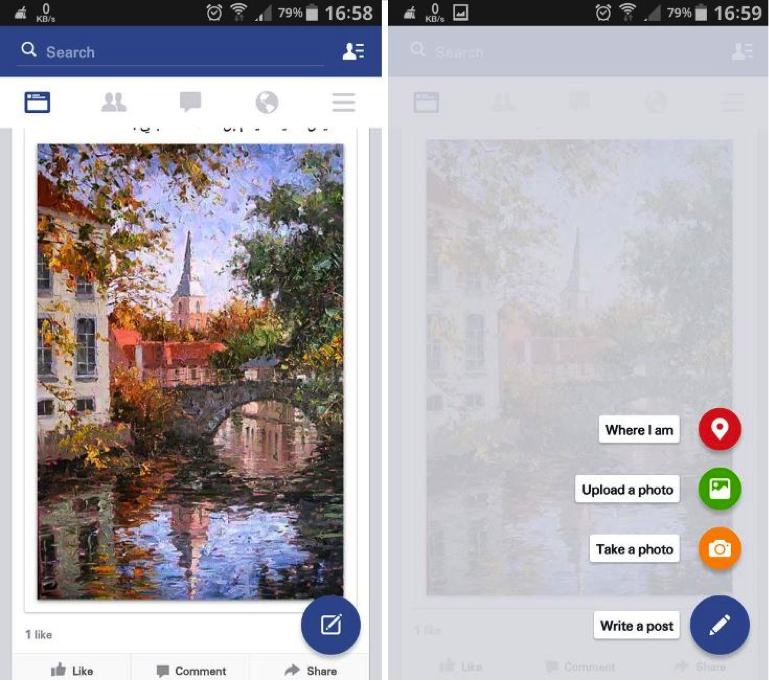 If Facebook’s Material Design app looks slick. If it proves to be functionally efficient, it’s reasonable to assume they could utilize some of the same design techniques to update their iOS app.

Facebook’s Android app redesign is reminiscent of the Gmail Inbox app. Considered one of the premier Material Design apps on the market, Inbox was developed by Google and provides a perfect showcase for Material Design aesthetics. Depth plays a major role in all the gestures. When the user swipes an email to mark it done, it reveals a green checkmark underneath the top layer as the email disappears off screen.

Check out his awesome promo video by Google which explains how Inbox works:

Inbox was created to manage mass volumes of emails. Larry Dignan over at ZDNet reviewed Inbox by forwarding his 700 or so work emails per day to the app to see how it handled organizing bulk emails. Inbox passed the test, allowing the user to create bundles of emails in order to better organize incoming messages.

With futurists predicting the downfall of email, the question becomes: Could the same Material Design techniques which the Inbox app uses to organize bulk emails and save screen space be applied to an encompassing Facebook social feed which replaces email?

Despite the obstacle of device fragmentation, as the next Android OS is released, Lollipop and Material Design are sure to become more and more prevalent. What makes Material Design so crucial is its role in connecting the Android device ecosystem. With more and more devices coming into the fray, Apple has been doing their part to push for Device Continuity, allowing for seamless transition between devices. Android may have to battle to overcome device fragmentation, but as Material Design gains momentum, their hardware and software will at least have aesthetic continuity.

The future of Material Design extends beyond the smartphone and the tablet. With the wearable revolution impending upon Apple Watch’s April 24th release date, it’s reasonable to assume Material Design will find outlets beyond traditional mobile devices as Android increases it’s wearable repertoire. If Google Glass had lasted, no doubt it would have utilized Material Design in its updates. Regardless, Android has several products in the pipeline that are sure to boast Material Design, including Android TV and Android Auto.

For now, Material Design is an Android-exclusive technique still vying for mainstream adoption. However, Facebook’s adoption of the design technique for their upcoming Android app is a good sign. As we look to a device-interconnected world, it seems inevitable the principles of Material Design will continue to evolve and shape the future of Android design aesthetics, and potentially expand to influence web and iOS aesthetics as well.

At Mystic Media, we’re constantly engaged in various app design projects. Our expertise reaches across all facets of the industry, be it iOS design, Android design, web design, strategic marketing and more. Contact us today by clicking here or by phone at 801.994.6815

Apple touts iOS 8 as their biggest iOS release ever. Coming from the biggest, most innovative technology giant in the world, that’s a major statement. In our ASO series, we found the apps which exploit the latest technology are much more likely to get featured in the Apple App Store. iOS 8 represents a major opportunity for app developers to get ahead of their competition by both creating new apps, as well as revamping current apps to take full advantage of the latest technology. In order to do this, one needs to understand the ins and outs of the new platform. Thus, we’ve compiled a list of the latest features and what they mean to developers.

Device Continuity is the future of Apple products, and Android will likely to follow suit. The idea is to allow users to seamlessly transition between devices without interrupting their current task. Imagine writing an email on your iPhone, putting it down, going into another room, and finishing it on your Macbook. Or playing a game on your iPhone, pausing it, going to the  bathroom and continuing on your iPad. The possibilities are endless.

The concept of Device Continuity has been planted in iOS 8 and the device compatibility will be expanded in the upcoming release of OS X Yosemite. MacBooks and iPads will have all the functions of iPhones in the future: the ability to make receive calls and FaceTime in addition to the functions they already retain. Devices will be so seamlessly integrated, MacBooks will be able to connect to your  iPhone’s personal hotspot for internet. When MacBooks are in use, iPhones will automatically shut off to conserve power.

App developers who are able to utilize device continuity both effectively and creatively will have a great chance at getting featured across the App Stores for iPhone, iPad, and Macbook.

While iCloud was used in iOS 7, Apple is now pushing the iCloud Drive (as it’s now titled) as it’s own cloud storage service like Box and Dropbox with data plans available for purchase. iCloud Drive allows for any type of file stored on computers and phones to be accessible from any device. iCloud Drive plays into Apple’s major conceptual push for device continuity and will be further explored with the release of OS X Yosemite this Fall.

In our previous article on iOS 8 rumors, one of the most talked about reports concerning iOS 8 was the “Healthbook App”. Sure enough, one of the major innovations in iOS 8 is the Health app, which can interact with other health-related apps on iPhone to create a one-stop dashboard of health data. The Health app can track the amount of steps you take, the distance you run, the amount of calories you consume, and more in conjunction with apps such as Fitbit and Jawbone. Unfortunately, many apps are currently unable to connect with Health due to a bug at the launch which Apple claims it will fix later this month. Despite the temporary road-block, the Health app is built to be compatible with other health-related apps and thus represents a great opportunity for iOS developers to find opportunities to capitalize with Health-compatible apps for iPhone and iPad users.

Another major feature of iOS 8 is Family Sharing. Family Sharing allows for families of up to six people to share their digital purchases from iTunes, iBooks and the App Store without having to share one account on one credit card. When kids attempt to buy things in the App store, a notification goes to the parent and the purchase can only be complete pending the parent’s approval. Family Sharing could potentially make in-app purchases for kids games much more profitable.

Safari can now use the iPhone camera to scan credit card numbers when making online purchases, speeding up iPhone-based eCommerce. A savvy developer could certainly find a way to integrate this into their in-app purchases to simultaneously exploit the latest technology and make it easy for customers to spend more money on their apps.

The host of other minor improvements includes a Siri equipped with Shazam, allowing her to recognize songs when asked. Apple also followed Android’s lead in employing QuickType, which gives shortcuts to the words users may be writing based on their texting history and what’s being typed.

Another minor innovation is the ability to send mini-voice messages as texts. As we’ve previously explored, communications apps are big business. Developers could potentially ingrain themselves in these voice messages by finding an innovative way to make voice messaging more fun, perhaps through audio filters.

The Verge got it right when they said “We won’t see the full potential of iOS 8 for weeks or months after its release”. While Apple’s announcement and subsequent release of iOS 8 is big news for developers, until OS X Yosemite releases later this year, we won’t know its full potential. In the meantime, developers start your engines, the race to exploit the latest technology in iOS 8 has begun.

Mystic Media is one of the most versatile and elite software design agencies in the United States. With experts in iOS and Android software development and marketing, Mystic excels in all processes involved in both app and web development. Learn more by clicking here or call us at 801.994.6815